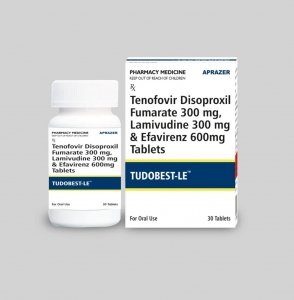 Activity against HIV in vitro

The concentration of tenofovir required for 50% inhibition (EC50-50% effective concentration) of the wild-type laboratory strain of HIV - 1IIIB is 1-6 mmol/l in the lymphoid cell line and 1.1 mmol/l against primary HIV-1 subtype b isolates in peripheral blood mononuclear cells. Tenofovir is also active against HIV-1 subtypes A, C, D, E, F, G, and O, as well as against Vichbal in primary monocytes/macrophages. Tenofovir also shows in vitro activity against HIV-2 with a 50% effective EC50 concentration of 4.9 mmol / l in MT-4 cells.

Activity against HBV in vitro

The antiviral activity of tenofovir against HBV in vitro was evaluated on the HepG2 2.2.15 cell line. ES50 values for tenofovir ranged from 0.14 to 1.5 mmol/l, and SS50 values (50% cytotoxic concentration) exceeded 100 mmol/l.

HIV-1 strains with reduced sensitivity to tenofovir and k65r substitution in the reverse transcriptase gene were isolated in vitro and in some patients. Tenofovir disoproxil fumarate should be avoided in patients who have previously received antiretroviral therapy and whose strains contain the K65R mutation.

In clinical studies involving patients who had previously received antiretroviral therapy, the anti-HIV activity of 300 mg of tenofovir disoproxil fumarate against HIV-1 strains with resistance to nucleoside inhibitors was evaluated. The results showed that patients whose HIV expressed 3 or more mutations associated with thymidine analogues, including m41l or L210W substitutions in reverse transcriptase, showed a reduced response to 300 mg of tenofovir disoproxil fumarate therapy.

After I/V application of Css, the distribution of tenofovir was estimated at approximately 800 ml/kg. After taking tenofovir disoproxil fumarate inside, tenofovir is distributed to many tissues, with the highest concentrations observed in the kidneys, liver and intestinal epithelium in different parts (preclinical studies). In vitro binding of tenofovir to plasma or serum proteins was less than 0.7 and 7.2%, respectively, in the range of tenofovir concentrations from 0.01 to 25 mcg / ml.

The pharmacokinetics of tenofovir did not depend on the dose of tenofovir disoproxil fumarate in the range from 75 to 600 mg and did not change with repeated administration at any dose level.

Tenofovir is mainly excreted by the kidneys, both by filtration and by the active tubular transport system, while after intravenous administration, approximately 70-80% of the dose is excreted unchanged in the urine. Total clearance was estimated at approximately 230 ml / h / kg (approximately 300 ml / min). Renal clearance was estimated at approximately 160 ml / h / kg (about 210 ml / min), which exceeds the glomerular filtration rate. This indicates that tubular secretion is an important part of tenofovir elimination. After oral administration, the terminal T1/2 of tenofovir is from 12 to 18 hours.

Studies have found that the active tubular transport system of secretion involves the absorption of tenofovir by proximal tubular cells via human organic anion transporters (hOAT) 1 and 3, and its excretion into the urine using a protein marker of multidrug resistance 4 (MRP4).

Pharmacokinetics in special groups of patients

Limited data on the pharmacokinetics of tenofovir in women indicate that there is no significant effect on the sexual principle.

Tenofovir pharmacokinetics parameters were determined after administration of a single dose of 300 mg of tenofovir disoproxil fumarate to 40 adult patients without HIV and HBV infection with various degrees of renal impairment, which were determined according to the initial value of the CC (renal function is not impaired if the CC is >80 ml/min, mild violation - if the CC is 50-79 ml/min, moderate violation - with a CC of 30-49 ml/min and severe violation - with a CC of 10-29 ml/min). Compared with patients with normal renal function, the average (%CV) exposure of tenofovir increased from 2,185 (12%) ng×h/ml in individuals with CC >80 ml/min to 3,064 (30%) ng×h/ml, 6009 (42%) ng×h/ml, and 15,985 (45%) ng×h/ml in patients with mild, moderate, and severe renal impairment, respectively. It is expected that increasing the interval between administration of the drug will lead to higher Cmax in blood plasma and lower Cmin levels in patients with impaired renal function compared to patients with normal renal function. The clinical significance of this is unknown.